4yrs ago from Conversation
One of the World Bank's mandates is to prepare for the physical and human capital reconstructions of post-conflict Syria. However, an image reconstruction of Syrians and of Syrian refugees is also needed
Vote up840 Vote down105 Comment276 Share Bookmark Tag 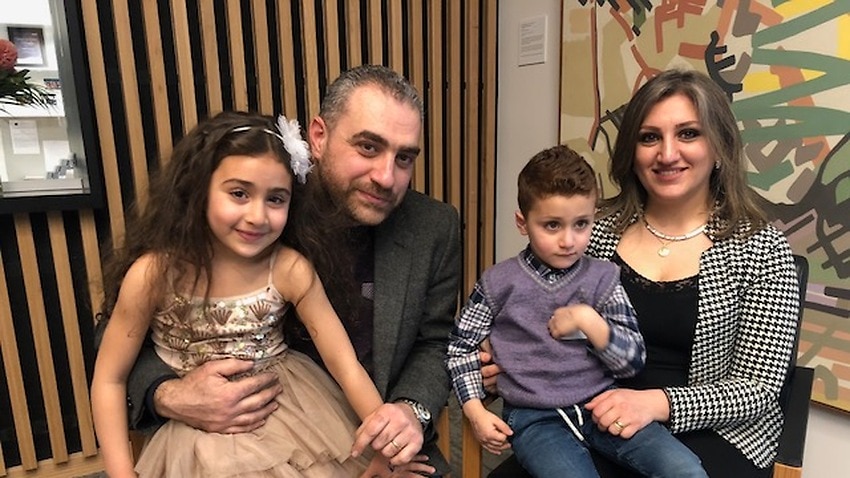 4yrs ago from SBS
Their arrival in suburban Melbourne was marred by the presence of anti-immigration protesters but, two years on, more than 60 Syrian and Iraqi refugees are...
Vote up609 Vote down840 Comment7 Share Bookmark Tag

4yrs ago from SBS
Their arrival in suburban Melbourne was marred by the presence of anti-immigration protesters but, two years on, more than 60 Syrian and Iraqi refugees are...
Vote up833 Vote down637 Comment508 Share Bookmark Tag

Stuck in Lebanon: a Syrian Refugee Family’s Life in Limbo

4yrs ago from Conversation
Reham and her family are among an estimated 1.5m Syrian refugees living in limbo in Lebanon.
Vote up368 Vote down962 Comment147 Share Bookmark Tag

4yrs ago from Washington Times
Hundreds of Syrian refugees have started crossing the border from Lebanon - the latest group to return to Syria from its western neighbor.
Vote up414 Vote down977 Comment267 Share Bookmark Tag

4yrs ago from Washington Times
The Latest on developments in Syria (all times local):
Vote up933 Vote down838 Comment636 Share Bookmark Tag 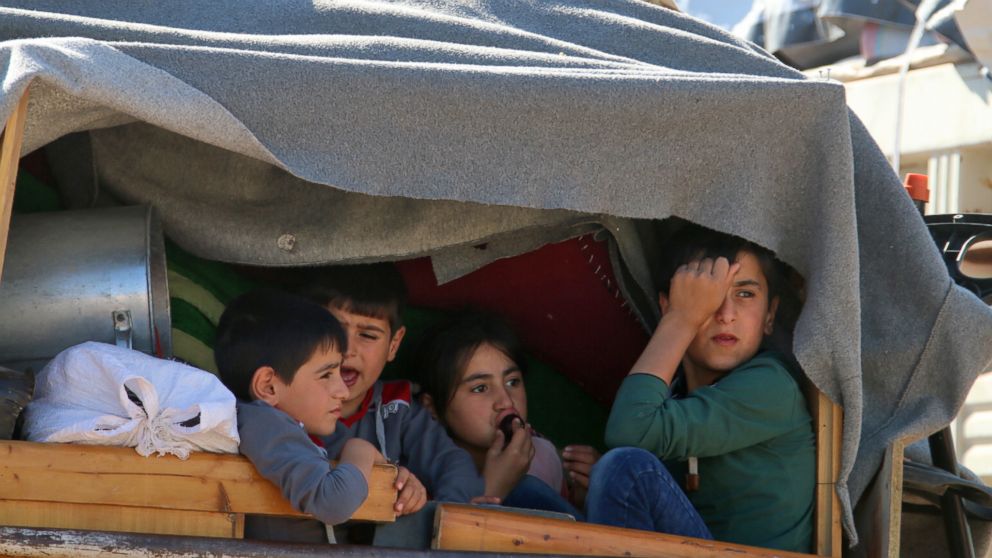 4yrs ago from ABC News
Putin specifically mentioned Russia and the U.S. working together to "help Syrian refugees to go back to their homes." Trump endorsed the idea too.
Vote up874 Vote down257 Comment163 Share Bookmark Tag 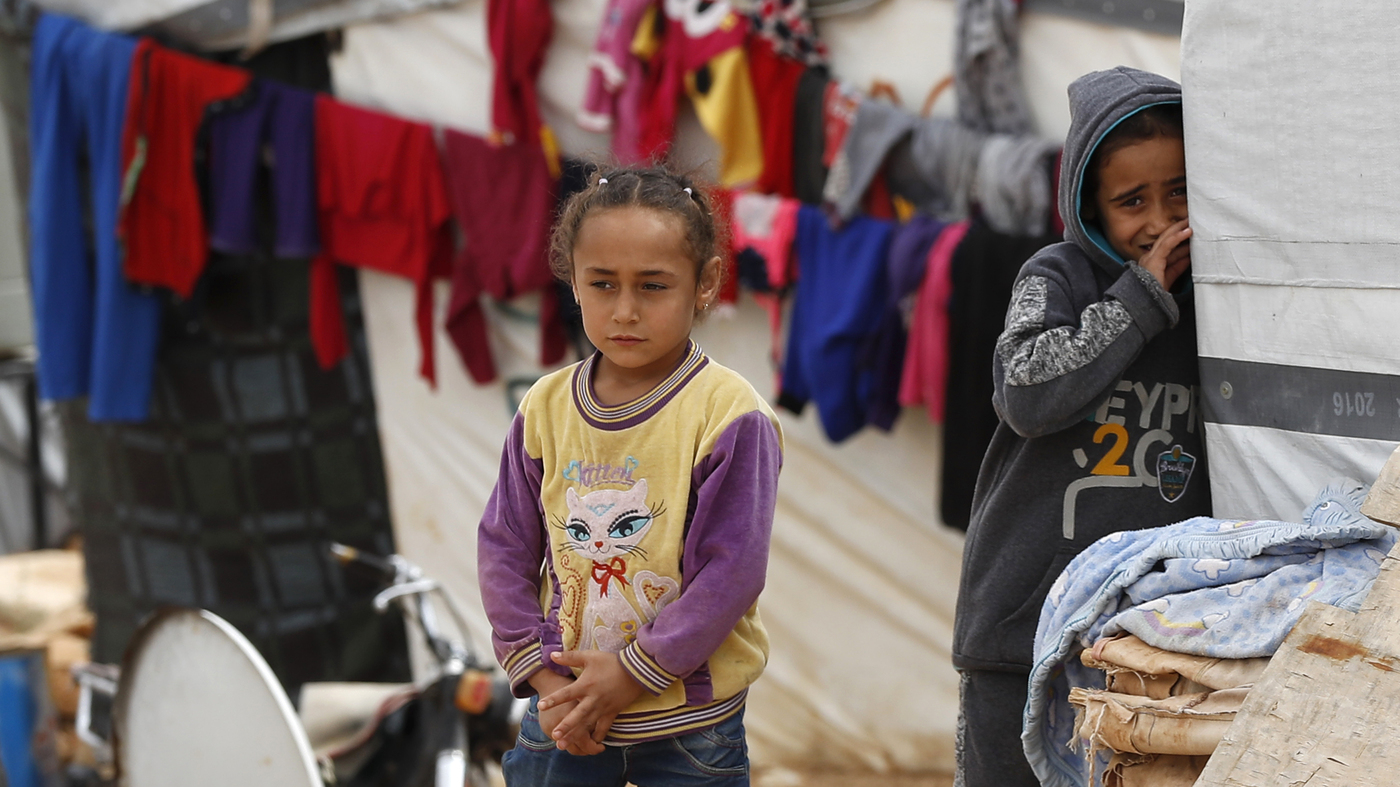 US Refugee Program 'In Danger' Amid Steep Drop in Refugee Arrivals, Advocates Warn

4yrs ago from NPR
Just 49 Syrian refugees have been admitted in fiscal year 2018, compared with more than 12,000 in 2016. "The refugee program is in danger," says the head of a resettlement organization in Connecticut.
Vote up735 Vote down84 Comment117 Share Bookmark Tag

Syrian Refugee Return Must Be Voluntary, UN Tells US, Moscow

4yrs ago from SBS
The United Nations says the return of Syrian refugees from countries across the region must be conducted on a strictly voluntary basis, after Russia...
Vote up181 Vote down919 Comment836 Share Bookmark Tag

4yrs ago from Red State
Not surprisingly, the woman has more empathy for Syrian refugees than her own neighbor.
Vote up272 Vote down467 Comment137 Share Bookmark Tag 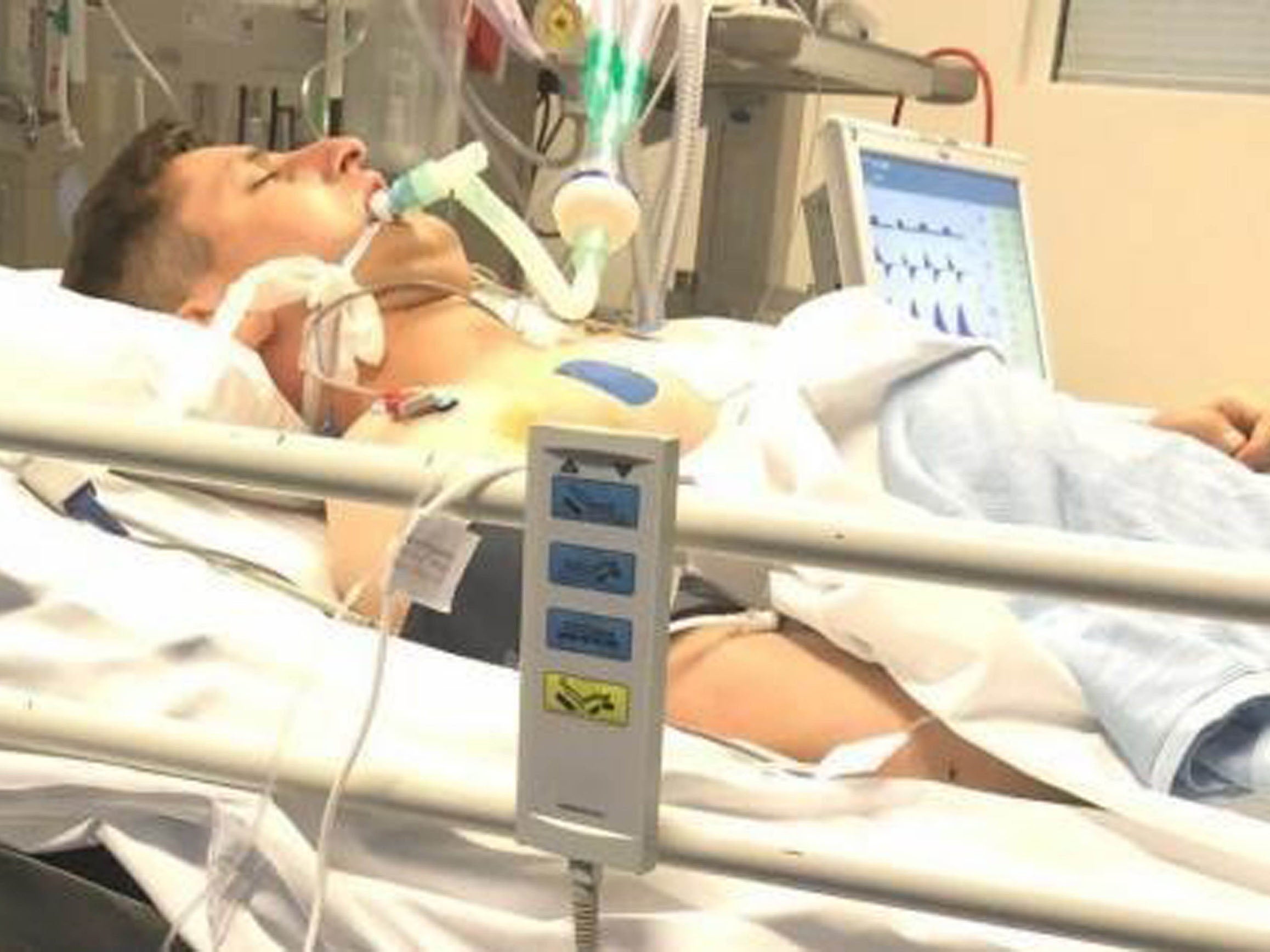 4yrs ago from The Independent
The victim's father said he could hear his son's attacker shout: 'Why are you still here, why are you not back in your own country?'
Vote up879 Vote down101 Comment191 Share Bookmark Tag Jordan Shut Out Out 60,000 Syrian Refugees - and Then Saw a Backlash. This Is Why.

America, Russia and Israel Are in Sync About Objectives in the Aftermath of the Syrian Civil War

4yrs ago from Washington Times
The Trump-Putin summit came at a highly propitious time, with respect to the Syrian civil war that is now in its final stage. Statements by both leaders reflect not only a common understanding of the problems in Syria that lie ahead but the reality that this is an area where both leaders have been engaged with Israeli Prime Minister Netanyahu on the need to ensure Israeli security as well as the refugee problem and a need to eliminate ISIS and other radical terrorists in the area.
Vote up916 Vote down891 Comment223 Share Bookmark Tag
Foreign PolicySyrian Refugees

4yrs ago from NewYorker
Following a regime-led offensive in southwest Syria, thousands of refugees face hunger and exposure to the brutal summer heat.
Vote up622 Vote down855 Comment843 Share Bookmark Tag 4yrs ago from Harpers
Drawing of Kos island, Greece, by Olivier Kugler, from his book Escaping Wars and Waves, published in June by Penn State University Press. An exhibition of drawings from the book, which document the circumstances of Syrian refugees in Kurdistan, Greece, England, and Germany, is on view at the Print House Gallery, in London. Excerpts from the book were published in the March 2014, February 2016, and August 2017 issues of Harper’s Magazine.
Vote up952 Vote down673 Comment950 Share Bookmark Tag Syrian Refugee Girl Born Without Legs Cries as She Gets First Prosthetic Limbs.co.uk

4yrs ago from Telegraph
The 8-year-old Syrian girl, quietly crying in an Istanbul clinic, was overwhelmed by the new set of prosthetic legs she had just received and taken aback by the cameras pointed at her by journalists attending the fitting.
Vote up373 Vote down857 Comment402 Share Bookmark Tag

Syrian Refugee: 'I’ll Be First to Enter Israel If They Open Border'

4yrs ago from Washington Times
After seven years of horrible death and refugee displacement the Syrian civil war is entering a final stage with little doubt as to the outcome. Bashar Assad is certain to remain in power and the only open questions are what foreign forces will remain in Syria and what parts of Syrian territory will be lost. As the war winds down, the U.S. as well as Israel and Russia all have key roles to play that need to be based on national interest and reality.
Vote up187 Vote down858 Comment338 Share Bookmark Tag 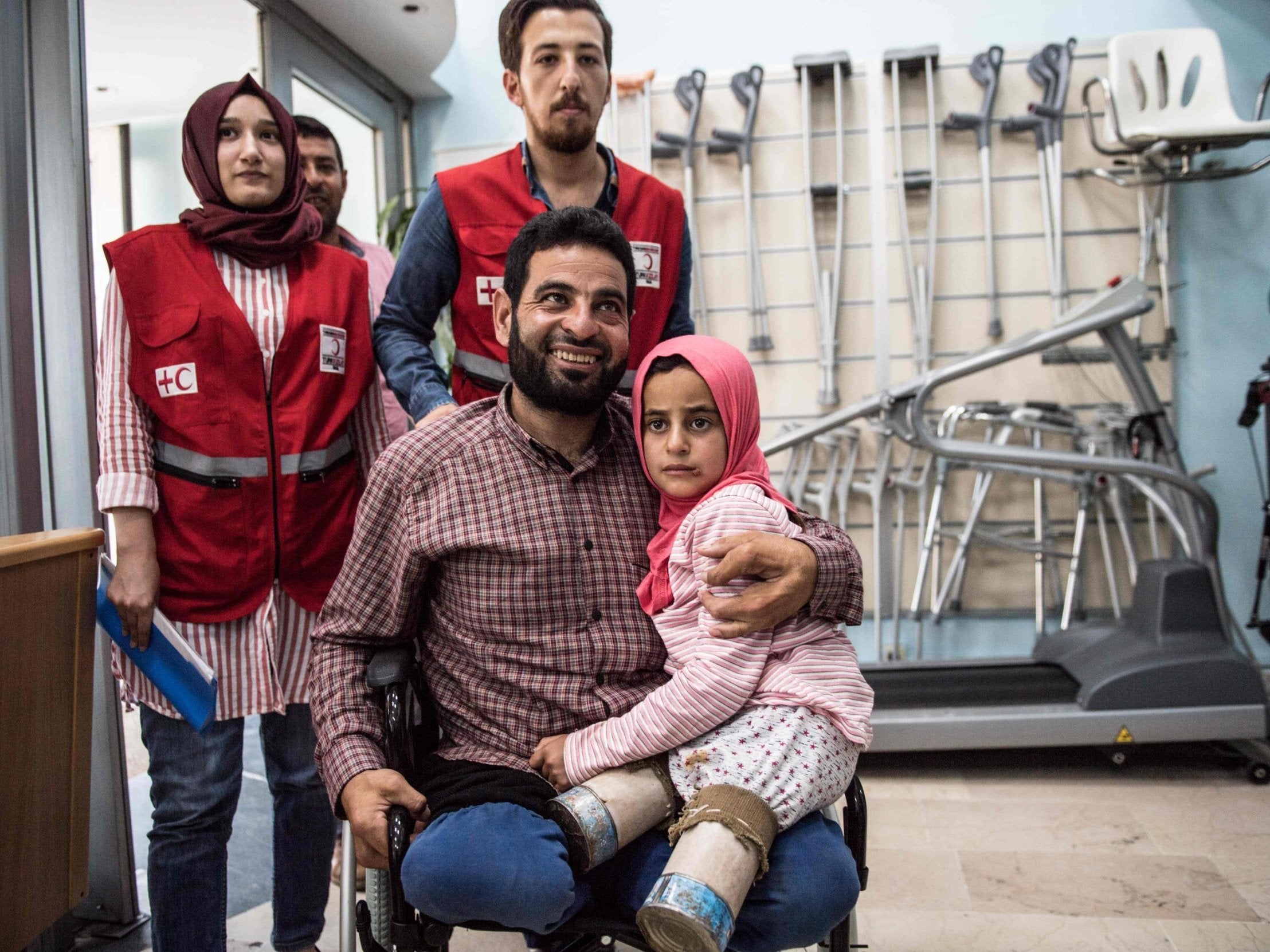 For the First Time Since 1951, an American Won’t Lead the United Nations’ Migration Agency

4yrs ago from The Week
The Trump administration's candidate to head the United Nations' migration agency has been rejected in a blow to the United States, which has held the post since 1951. "The American is out," Senegalese diplomat Youssoupha Ndiaye told The Associated Press after voting in Geneva. The American candidate, Ken Isaacs, is the vice president of an evangelical charity, with his only relevant experience being a short stint as a political appointee in charge of overseas disaster relief under former President George W. Bush. Isaacs' candidacy was called into question after his old tweets surfaced, containing messages calling Muslims violent and insisting that "Christians" be the "first priority" when it came to the Syrian refugee crisis. The race to lead the migration agency is now between Portuguese Socialist Party member Antonio Vitorino and Costa Rica's Laura Thompson, the deputy director-general of the International Organization for Migration. "The person who leads this needs to be a symbol of the international community's support for humanity," the president of Refugees International, Eric Schwartz, told The Washington Post. "And that means that dark-skin people and Muslim people have the same inherent worth as any other people." Jeva Lange
Vote up101 Vote down631 Comment114 Share Bookmark Tag 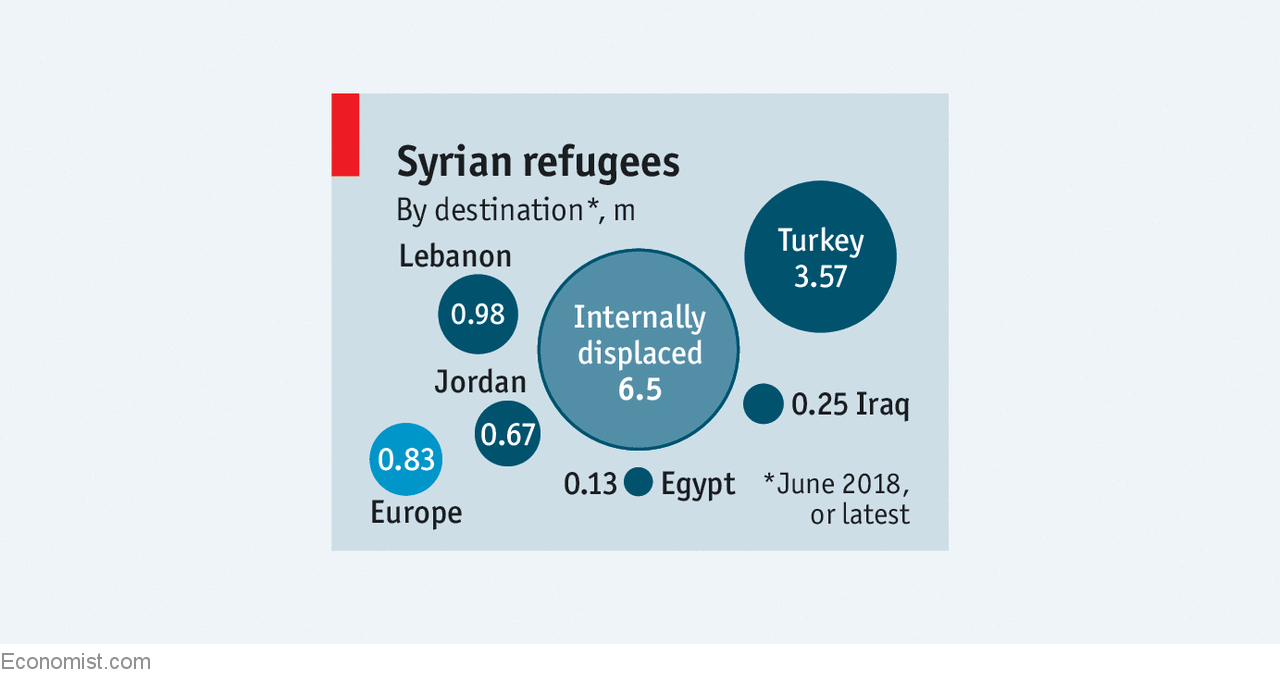 Syrian Refugees Could Turn into the New Palestinians

4yrs ago from Economist
Unless millions of refugees can be sent home safely, they could destabilise the Middle East for decades to come
Vote up292 Vote down440 Comment54 Share Bookmark Tag

4yrs ago from Washington Times
Women and children crammed in the back of pick-up trucks piled high with mattresses and blankets, dozens of Syrian refugees in Lebanon began crossing the border Thursday, heading back home to an uncertain future in war-torn Syria.
Vote up737 Vote down984 Comment521 Share Bookmark Tag

4yrs ago from ABC News
Syrian refugee Mahmoud Mansour fears he and his family will get stuck in Jordan instead of resettling in the United States, and this week's Supreme Court ruling on the Trump administration travel ban added to his dread. The ruling upholding the entry ban for residents from seven countries,...
Vote up61 Vote down209 Comment56 Share Bookmark Tag

Fighting in Syria Heats Up as Russian-Backed Airstrikes Shut Down 3 Hospitals, Displace 50,000

4yrs ago from The Week
Fighting in Syria is escalating once again, with government forces setting their sights on rebel-held areas near the country's border with Jordan. Overnight air strikes have shut down three hospitals near the southwestern city of Deraa, BBC reports. This is the Russian-backed government's latest attack in an offensive push launched last week, which has already displaced nearly 50,000 people. Deraa, which borders Jordan and the Israeli-held Golan Heights, is one area where Syria's government has lost ground since its civil war began, AFP says. The war did calm down in the past year after Iran, Russia, and Turkey ironed out a deal to cease fighting between Syria and rebel forces, per Al Jazeera. But Syrian President Bashar al-Assad's military has recently ramped up attacks to regain lost territory. Around 50,000 people have left their Deraa-area homes for nearby countries, says the United Nations. But it's unclear where they'll go, as Jordan recently announced it won't take in these new refugees, per AFP. This displaced population will add to the nearly 5 million refugees who have left Syria since its war began in 2011, along with another 6 million displaced inside the country. Kathryn Krawczyk
Vote up887 Vote down808 Comment130 Share Bookmark Tag 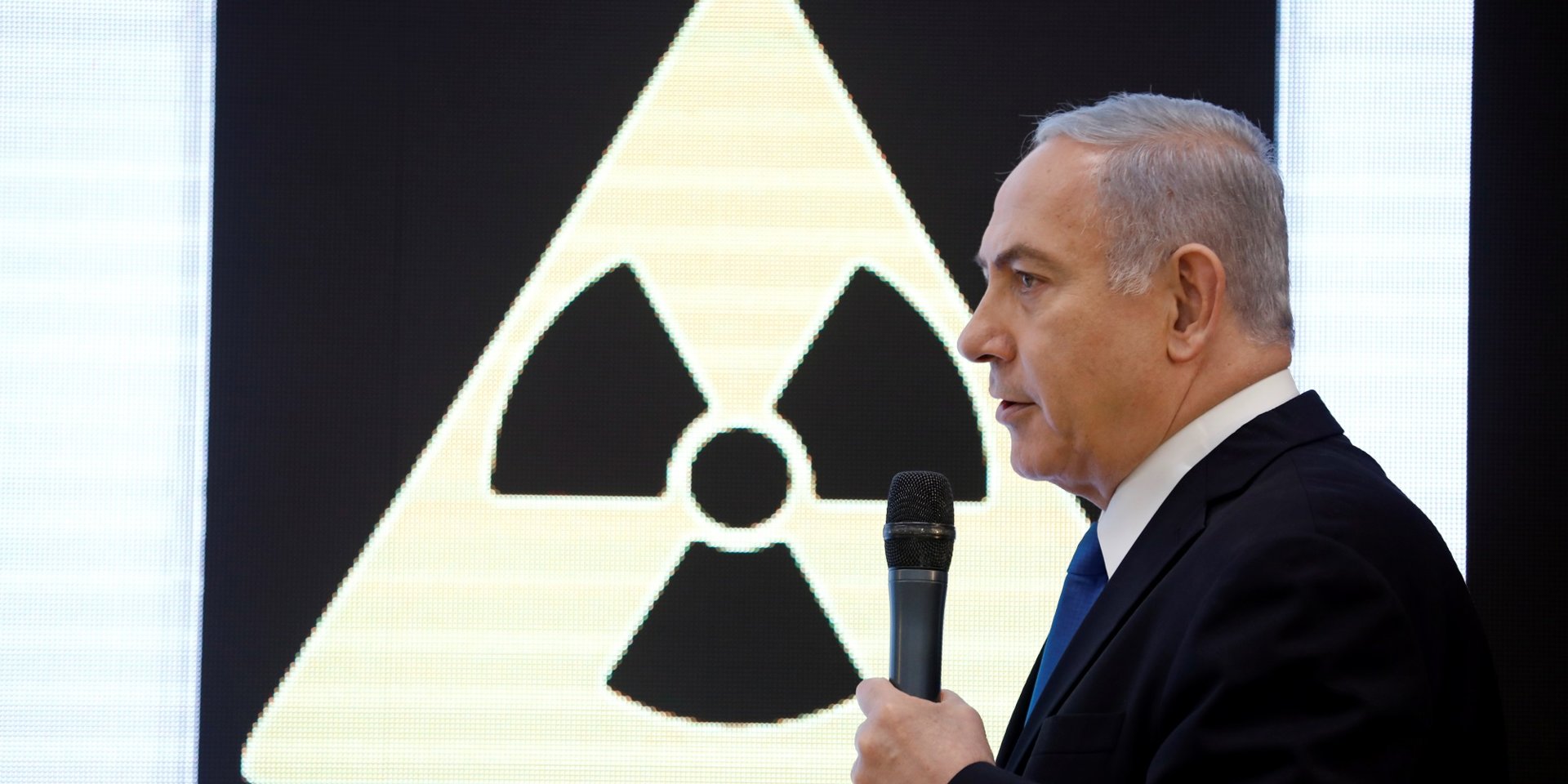 4yrs ago from ABC News
A public spat between the Lebanese government and the U.N. refugee agency deepened Wednesday as Lebanon's caretaker foreign minister kept up his criticism, accusing the agency of discouraging Syrian refugees from returning home. "It's time to tell them enough. That's it," Gibran Bassil...
Vote up836 Vote down613 Comment826 Share Bookmark Tag

4yrs ago from The Week
"We are seeing a massive displacement inside Syria," Panos Moumtzis, the United Nations regional coordinator for Syria, said Monday. "From January to April, there were over 920,000 newly displaced people," he continued. "This was the highest displacement in that short period of time we have seen since the conflict started." This new wave of internal displacement brings the total refugee population inside Syria to about 6.2 million, while another 5.6 million Syrians are refugees outside their country's borders. The last widely accepted death toll estimate was 470,000 killed in the conflict as of 2016; subsequent estimates put it as high as 511,000 and as low as 188,000. Syria's total population in 2010, before the civil war began, was about 20 million. Moumtzis highlighted recent escalation in fighting and airstrikes in and near the city of Idlib as particular cause for concern. Idlib is supposed to be a de-escalation zone, and it is already serving as a temporary home to civilians displaced from Aleppo. For those living in Idlib now, "there is no other Idlib to take them out to," Moumtzis said. "Really, this is the last location. There is no other location to further move them." Bonnie Kristian
Vote up329 Vote down707 Comment924 Share Bookmark Tag

4yrs ago from Washington Times
When Ali Turki Ali’s flight landed in Eugene three years ago, the Syrian math teacher knew no one in the city that he would come to call home.
Vote up28 Vote down589 Comment360 Share Bookmark Tag 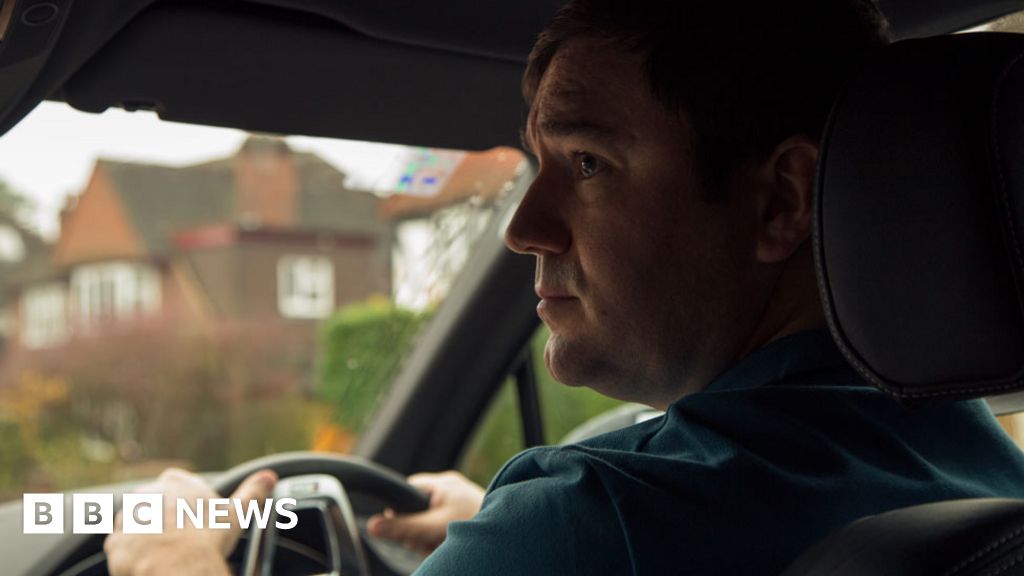